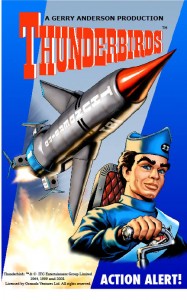 All the Tracys are dedicated men of action, and Scott Tracy is no exception! The eldest of Jeff Tracy’s sons, Scott pilots the rocket-reconnaissance aircraft, Thunderbird 1. First to arrive at any disaster scene, he evaluates the situation and coordinates the team’s rescue strategy on site. Due to the importance of Thunderbird 1 to International Rescue’s operation, Scott is present for nearly every rescue mission. Nonetheless, even Scott has his limitations, and in Action Alert, he stretches himself to those very limits. Can he do so without consequences to himself and International Rescue?

The next Thunderbirds novel will be Action Alert, which will concentrate on Scott Tracy (just as Countdown to Action! concentrated on Jeff Tracy). All the Tracys, nonetheless, will appear in the novel.

The projected publication date is November 2008.

I expect to be able to post the front cover in the next couple of weeks.

I spent the last week shipping over 275 copies of Countdown to Action! According to the shipping confirmations, many copies have arrived already, and the others are on their way. Generally, I can ship the next business day after receiving an order.

The printer delivered Countdown to Action today! The books look great and I’m filling the preorders as quickly as possible.

The Countdown to Action proofs have been approved and we are on schedule for a publication date on or before Thursday, June 12. I will post once the book is published.

Countdown to Action has been delivered to the printer. 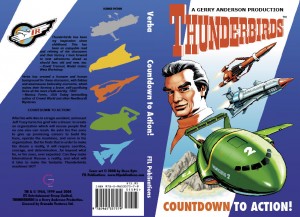 I’ve received the following endorsements for Countdown to Action! which will appear on the back cover:

Thunderbirds has been my inspiration since childhood. This has been an enjoyable read and reliving of the characters and their history. I look forward to new adventures ahead as should fans old and new, too.
—David Tremont, Model maker, Weta Workshop

Verba has created a humane and human background for these characters, with foibles and weaknesses believably overcome, which makes their forming a brave, self-sacrificing force all the more credit-worthy.  FAB!
—Monica Ferris, USA Today bestselling author of Crewel World and other Needlecraft Mysteries

When I’m at conventions, interested parties come to me and ask what age the novels are intended for. What I tell them is that it is advertised for ages 12 and up, and that “It’s not so juvenile that an adult couldn’t read it, and it’s not so adult that a juvenile couldn’t read it.” As with the original Thunderbirds television show, I did want a novel that could be enjoyed by both adults and younger readers.

There is no strong language (“hell” is about as intense as it gets), no sex, no graphic violence. There are, of course, rescues, rescues, and more rescues.

Earlier this week, I received a question asking if the upcoming Thunderbirds novels will be text-only novels or graphic novels.

The answer is that they will be text-only novels. The only artwork will be on the cover.

FTL Publications is taking preorders for Countdown to Action.

There are several advantages to ordering direct from FTL Publications:

1. The book will be shipped as soon as it is published

3. You can have an autographed copy by placing a note in the special instructions that you want one

5. There is a money-back guarantee. Return for a full refund if not completely satisfied

This week’s March 20 Publishers Weekly online has an article about the upcoming Thunderbirds books and FTL Publications.

FAB is the newsletter of The Official Gerry Anderson Appreciation Society (Fanderson). Issue 59 just reached my mailbox yesterday. They included a very nice article about the upcoming Thunderbirds books and provided the FTL Publications address (www.ftlpublications.com). I was thrilled to get a mention there, since I’ve been a member for some years now and always find their newsletters interesting reading.

Most booksellers want the publisher to state what “category” a book is, so they know where to shelve it.

This past week, I was contacted by a columnist for Publishers Weekly. The columnist wanted to interview me and place the interview in the online edition in the children’s bookshelf. Again, this is ideal placement, since many books listed in the children’s section (such as The Hobbit) are read by both young people and adults, giving the Thunderbirds books maximum publicity.

I’m very pleased at how word is spreading about the Thunderbirds books, and in particular, that people realize that the books will be suitable reading for all age groups.

I went to a convention this past weekend and sat behind a table spread with my Thunderbirds tablecloth. Although I was selling books that FTL Publications has previously published, I also had information on Countdown to Action!

I’ll be at other conventions throughout 2008 and look forward to meeting more Thunderbirds fans!

A summary of the plot has been published on the FTL Publications site.
(Click on the cover at ftlpublications.com for details.)

After his wife dies in a tragic accident, astronaut Jeff Tracy is left with five young sons to raise. But he turns his grief into a dream: to create an organization which will rescue people that no one else can reach. He builds a business which creates the new technology that the organization will require and earns the billions he needs to finance it. At last, he is ready to put it all together. He enlists the services of a genius to design aircraft and supporting machinery far beyond the standards of his time. Together, they find a South Pacific island to use as the base of their operations. Then he asks his five sons, now grown, to give up promising careers to build the base, operate the machines, and serve in his organization. But he finds that in order to make his dream a reality, it will require sacrifice, courage, and determination…far beyond what he, or his sons, ever expected. Can they make International Rescue a reality, and what will it take to make the fantastic Thunderbirds machines GO?

FTL Publications, a press based in Minnetonka, Minnesota, has received a license from Granada Ventures in London to produce two novels a year based on the Thunderbirds television series.

“I’m thrilled to have this license,” says Joan Marie Verba, the Publisher at FTL Publications. “No series of novels based on the original series has been published in 40 years, and never before has a North American publisher been granted a license to produce novels featuring these classic characters. It’s quite an honor.”

Verba believes there will be no problem finding readers in the US or Canada. “I run into people all the time who remember Thunderbirds from the 1960s, or from Tech TV, or currently, from the Voom! satellite channel.”

Verba herself is a fan of the Thunderbirds universe. “I remember watching the Gerry and Sylvia Anderson productions during the 1960s. I loved Supercar, and Stingray, and Fireball XL-5. I watched every episode. When Thunderbirds came along later, I enjoyed that series as well. Early in the 21st century, the complete series was released on DVD, and I was delighted to recapture all the excitement.”

Verba will write the novels as well. “As a fan myself, I know how important it will be to the readers that the characters and situations be true to the series. Each character has a following, and I know the readers will be watching to see that their particular character has enough to do. Further, fans of Thunderbirds will be pleased to know that there will be plenty of action and adventure, as well as rescues, rescues, and more rescues.” The events of the first book will be set just before the premiere episode, “Trapped in the Sky,” and will detail the development of International Rescue. That book will be released in June 2008. Subsequent novels will focus on each of the Tracy brothers.

A member of the Science Fiction and Fantasy Writers of America and a member of the Society of Children’s Book Writers and Illustrators, Verba has experience not only in writing in a futuristic setting, but also in writing stories that will appeal to every member of the family. Further, with a bachelor’s degree in physics and one year’s experience as an associate instructor of astronomy, Verba can bring a level of scientific expertise to the stories, as well.

Verba expects the books to appeal to a wide range of readers: “Thunderbirds was a great series, and has the potential to generate unlimited stories. I’m looking forward to engaging not only current Thunderbirds fans, but those who have not yet discovered Thunderbirds.” 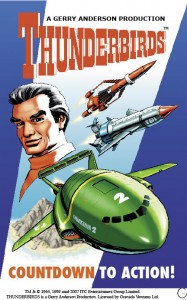